When hiring managers begin to write the list of qualifications,
they build lists of everything they think they want in a candidate.
It’s a process not unlike building a dating profile; pulling
characteristics out of the air to describe the perfect match. In
dating, people tend to understand that finding someone who matches
that description is unlikely. When they find someone they like, it
is almost a coincidence when they match even the broadest elements
of the original profile.

By contrast, hiring managers frequently use far less latitude in
their candidate searches. The descriptions involve far more precise
requirements and they are less likely to waiver on them should
someone outside of the criteria apply.

???Using vetting of candidates based on stringent requirements
can keep out the candidates who have no place in an organization,
but there isn’t an automated filter that is going to increase your
ability to identify, much less attract impact players to your
organization. There isn’t an accredited Master of Innovative Thinking degree or
Doctorate of Self Starting, and a resume that claims someone has
such qualities only means they know those skills are
important. 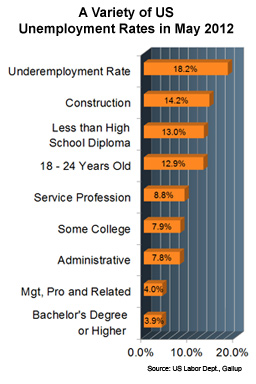 The 8.2 percent national unemployment rate, and even the 3.9
percent bachelor’s degree and higher unemployment rate, seem to
still give employers a false sense of plentiful candidate supply.
It’s like the man stranded on a tropical island, surrounded by salt
water – yet dying of thirst.

In the early days of the recession, we saw amazing candidate
availability. Top candidates truly were victims of circumstance –
doing great work but losing their positions regardless – and became
available on the active candidate market. But a type of reverse
osmosis has had time to set in. The most desirable
candidates found new positions. Today’s unemployed population –
especially the professional space – largely consists of people
whose skills and education doesn’t match with the needs of the
marketplace.

When talking casually to hiring managers they know how tight
the market is, they understand that of the 1.3 million
professionals who are unemployed, they are unlikely to find that
one person with fifteen years of wind propulsion experience who is
willing to relocate to them. But as soon hiring a candidate leaves
the abstract and interviews are being conducted,managers start
looking at the 8.2 percent unemployment rate or the 17.9
underemployment rate and hold out for a candidate who matches
the detailed profile they’ve written. By holding the line so
tightly, though, they will often overlook someone who could
actually be their perfect match.